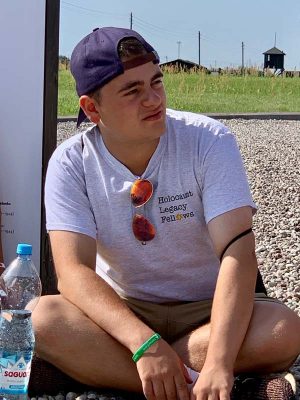 Over the course of my nine or so days in Germany and Poland, I reflected a lot both individually and with the group about why we are here as Holocaust Legacy Fellows; it really all boils down to the idea of “never again” and how we must keep the legacy of the Holocaust alive in order to ensure we never repeat the past. This issue is becoming increasingly pertinent in a political climate filled to the brim with vitriol, where we have seen completely illegitimate and grossly inappropriate comparisons made to the Holocaust, most prominently being that of concentration camps to the detention centers at the border and President Trump to Hitler, which can mainly be traced to a wholly fabricated story about Trump calling neo-Nazis at Charlottesville “fine people.” The fact that Trump is not a Nazi and that the detention centers are not at all close to the concentration camps of the Holocaust are entirely apolitical statements, regardless of one’s political sentiments. To make these claims is to delegitimize the atrocities committed by the real Nazis during the real Holocaust, and it is to invoke the word “Holocaust” and the sequences of of events with which it is associated in vain.

But this does not mean there is not real anti-Semitism in the 21st century that we can observe and warn others about. In Poland, I saw first-hand the burlesque effigies of Jews in souvenir shops intended exclusively as caricatures meant to be ridiculed. It was so incredibly sad and downright frustrating to see my people, a people that has persevered through literal millennia of persecution, to be boiled down into chests of coins, long beards, and big noses in the same ways that the Nazis used these stereotypes to categorize the Jews as racial untermenschen. Even more tragic is that these shops are located a mere handful of miles from the actual camps where Jews were systematically murdered. Additionally, the European Union just reported a new potential policy where products sold from Israel by Jewish businesses be labeled as goods from “Israeli colonies” whereas products sold from the same area by Muslim businesses be labeled as goods from “Palestine.” Such an idea would allow selective divestment of Jewish goods in a manner eerily similar to what is propagated by the BDS movement— blatant anti-Semitism. Our world is clearly in no shortage of anti-Semitism, so we have to make sure that such accusations are placed appropriately on people and policies that actually exhibit hateful ideologies and prejudices towards targeted groups of people.

However, I think the most impactful lesson I learned during my time in Europe as a Fellow was the significance of the individual. Leading up to the trip, we were all assigned to gather six stones and to pack them in our luggage. Upon arrival, we were instructed that the stones were to be used to pay respects to various sites of death, such as mass graves, cemeteries, and crematoria; just as Christians pay their respects with flowers, so do Jews with stones. On the last day of the trip, we visited our final camp, Majdanek, after having visited Treblinka and Auschwitz-Birkenau previously. I had not yet been emotionally moved enough to cry, as this is something I seldom do. Yet at the end of Majdanek, there was a massive pile ashes, so gargantuan that it required one or two minutes to circle around by foot. Seeing these ashes made me feel something within me that I had never felt before, almost like a strange sense of connection. As I finally let the tears flow, I spotted a human bone relatively close to me. Knowing that I have pretty good aim, I decided to throw one of my stones next to the bone as a way of connecting with this person. Sure enough, the stone fell right next to the bone, and I felt more linked to this specific person in a way I’ll never be able to describe adequately. I’ll never even know if they were a man or a woman, or what their name is (the quality that gives people their humanity), but at least I am breathing life back into this individual through my recognition of his or her life and death. My stones were collected from Preston Beach, which is about a minute walk from my house, meaning that I frequently go there either with friends or by myself. I have decided that every time I visit Preston, whether it’s to play a boisterous game of touch football with friends over the summer or to take a long, reflective walk by myself after a stressful day at school, I will always think of this individual; in this way, he or she will never truly die while I am alive, and I plan on keeping him or her alive after I am no longer alive by telling this story to my children and grandchildren.

Most of all, I feel that this person has taught me that it’s too easy to get caught up in the numbers. 6 million Jews killed in the Holocaust. 2,996 killed in 9/11. 22 killed in the El Paso shooting. But these numbers should never distract us from who is behind them: the individual. I have decided that from now on, after every mass tragedy of sorts (tragedies that I pray never happen again but pragmatically recognize are inevitable) I will be sure to read each and every name when doing so is reasonable. Unfortunately, after flipping through the massive Book of Names exhibit at Auschwitz-Birkenau, I came to the conclusion that if I were to read about one Jew killed in the Holocaust every day for the rest of my life (assuming a fairly reasonable lifespan), I would not even be able to give recognition to three-quarters of one percent of those 4 million or so documented in the Book. Upon the completion of this mind-boggling calculation, I experienced an epiphany where I felt that I truly understood the core of the message behind our entire trip, which is again that of the individual. I have already begun to tell my parents some of the stories our wonderful tour guide, Sara, told our group about her father, who survived the Holocaust and started a family despite facing death directly well over a dozen times. In carrying on the stories of these people, both through oral tradition and through physically taking future generations of young people to the camps, both of which I plan on doing throughout my life, I can carry out the mission of the Holocaust Legacy Fellows, which is “preserving and perpetuating the memories and lessons of the Holocaust for future generations” to the fullest extent, one individual at a time. Perhaps each individual story whose metaphorical flame is kept alive by myself and others can chip away at the contemporary misunderstanding of the true meaning of the Holocaust.