After going on the Holocaust Legacy Fellows trip to Germany and Poland and further throughout the entire experience of classes and meetings it is no doubt that learning about the Holocaust is extremely important, but what is of even greater importance is why. Jewish suffering in the world did not start nor end at the Holocaust. We were first persecuted by pagans after accepting God and the covenant. As time went on each nation we were in harbored anti-semitic attitudes, and so started the history of exile for the Jewish people. There was never a place for our people to call home throughout history beside the golden age of Israel in the initial inception but as history tells it was destroyed and we were displaced once again, across Europe and across the world. Again in the diaspora antisemitism rose to a boiling point that we know of as the Holocaust, a vast majority of Europes Jews were murdered leaving little left to this day. With a continued rise of antisemitism still in the 21st century, the importance of carrying on the legacy to end antisemitism and to tell the story of its victims becomes greater each day.

The most important lesson I learned from the Holocaust Legacy Fellows trip is that Israel is no longer a luxury but a necessity. This might seem like a semi-far fetched lesson to learn from a trip, not about Israel but in reality, it has everything to do with it. The Holocaust showed us that we require a Jewish majority state to protect and defend our people, and in a time where that state stands strong against all odds, this lesson is an extremely important takeaway. While the grueling details of the tragedy were just as important this larger takeaway factors those details in. In order for that to never happen again, Israel must be there to protect us and soon enough we might require it to protect us if trends of rising antisemitism continue to skyrocket across the world.

From this trip, I learned that humanity is a very fickle thing. We’ve seen throughout history that it has waxed and waned in terms of morality and the Holocaust is no exception. The Nazis were not robots, but humans capable of everything humans are and at one point or another held humanity. We learned it was quickly tossed aside in times of hardship and replaced with deep irrational hatred. This is a lesson we all need to think very carefully about. We are humans with humanity just as they were, and we saw how little it took for them to lose it this. This applies to all of us today. In times where we are being targeted still by people lacking this humanity and decent nature, we must be extremely vigilant of our own actions and our own humanity in a time where hate lies around every corner and in the mouths of politicians and leaders from every country on Earth.

I plan to fulfill the mission of the Holocaust Legacy Fellows by speaking in my own community to not only Jews but to Christians, Atheists and hopefully the entire community because my unique experience is one almost all people need to hear. If I exhaust those options, I will only look further beyond my small bubble of a community and try to spread my message, my experience, and the message of Holocaust Legacy Fellows. Even further, I hope to continue this work beyond the required work of the end of the trip project and onward through my life. As the remainder of the survivors sadly passes away, the power of deniers and antisemites only increases. It is my job as a Fellow to carry on the legacy of the Holocaust and my experiences throughout my life. 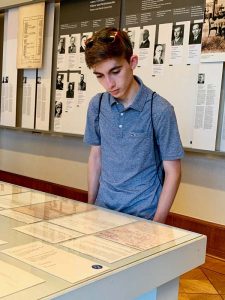 It is no question that the Holocaust Legacy Fellows experience has impacted me in a way beyond words but I will try my best to articulate it. To stand in three concentration camps, mass graves, gas chambers, crematoria, and to stare into a pit of ash and bones is no easy feat nor is it an easy sight to process for me and all the Fellows. I’m sure this alone was a challenge. We all know the number six million but to really understand what that means is truly impossible even after this trip but I will try. Think of every Jewish person you know personally, then those you know as celebrities, politicians, etc, and then even the ones you’ve seen in your many years on this Earth. Now imagine them all gone, not killed but murdered, taken away in the night and even in broad daylight. Then think to yourself, about how small of a number of Jewish Americans you know. Then every other Jew in America today would be murdered on top of this you’d have to add an extra one million lives to get to the number of the Holocaust. While it is still improbable to process this exercise shows just how high the number truly is. Holocaust Legacy Fellows has impacted me in a way so deep to my very core that I will never stop fighting antisemitism wherever it may be in the world. Through thick and thin, it is now in our hands and in the hands of our generation to secure a Jewish future in America and a Jewish future in the world.