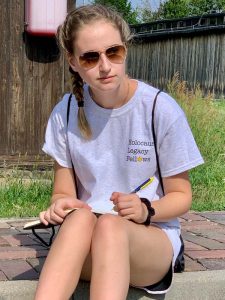 When I accepted the commitment to become a Holocaust Legacy Fellow, I knew that my personal knowledge and experience of learning about the Holocaust had been patchy, even attending a Jewish High School, and having never studied WWII or Nazi Germany. I knew I would be hearing testimonies from this dark period in Jewish history. I knew this might be the last time I’d have the opportunity to hear these stories from Holocaust survivors firsthand. That was pretty much all I knew.

Last year, I went to Israel and visited Yad Vashem. It was a powerful experience. The facts and stories I heard about the Holocaust have been important but until I walked into Auschwitz, I don’t think I had fully grasped the nature of what took place.

Traveling from Berlin to Warsaw before our planned visit to Auschwitz, we went from cemetery to monument to memorial site, hearing of numbers and death. I willed myself to try and understand what it means to have lost 11 million lives in a needless and brutal massacre. The unimaginable horror of the Holocaust. Murder on such a large scale that can barely be processed by my mind. The inhumanity to men, women, children and grandparents. I thought I knew what Auschwitz and the the Holocaust was, but I was wrong.

Six million Jews murdered. One million of those Jews in Auschwitz murdered. It is difficult to comprehend. Black and white video and pictures in a textbook allowed me to be distant from the reality of it, and made it easy to think that what happened was a long time ago and in another place. I remember thinking, that could never happen now. How could that be allowed to happen? We are more informed and more tolerant. We have learned the lessons.

Auschwitz. Just hearing that word fosters so many emotions. While visiting Auschwitz, I was forced to confront the uncomfortable truth that this was not a story or a movie. It happened. It happened not too far from here and not too long ago. And many, many people made it happen.

Auschwitz not only gives you a feeling of the personal tragedy, but reveals the full scale of it. It is hard to put into words. You have to see it. This was the product of the Final Solution to the Jewish question. Line after line of barracks, many demolished, some still standing and some re-built for the museum. The barracks had stone floors and wooden frames were crammed with 400 prisoners, seven to a bed, sometimes over filled to hold 1000 people. The conditions were disgraceful, and it was freezing in the winter. People died constantly from starvation, disease and the cold. And these were just the people kept from immediate extermination. Everyone there was in constant fear of execution which was a daily event.

In Auschwitz you see and hear about the nature of the extermination process. It was just so hard to get my head around the numbers involved. The determination of the Nazis to murder on that scale is mind blowing. So how could this be done? How could a world turn its back on mass murder? How could ordinary people, normal people be involved in the systemic murder of others? That’s the other lesson that Auschwitz taught me. Jews were dehumanized. It was easy for the Nazis to close their eyes to justify this if they made them less than human. The wearing of stars to objectify the individual, and once in the camps, the uniform, a tattooed number and hair shaved. All means of personal identification taken away.

The most powerful thing at Auschwitz for me was the photographs of the victims. The curator re-humanized the victims of the Holocaust for me, showing people full of love and hope. Families at weddings, people on the beach, and even children at parties. This pictures could have been my own family. The same smiles, the same hair styles, the same glasses and clothes. When I think of the people who died there now, they are no longer naked, shaven heads and skeletons in pictures or videos. They are people like me.

It is shocking that the Holocaust happened only 70 years ago. I came away from my Holocaust Legacy Fellows experience feeling more strongly than ever that Holocaust education must feature in every public school and private school, and a desire to challenge antisemitism. A few assemblies and memorial services are unlikely to be enough, even though they are a start. The Holocaust and humanity should be a taught to everyone. What else could be more important than that?