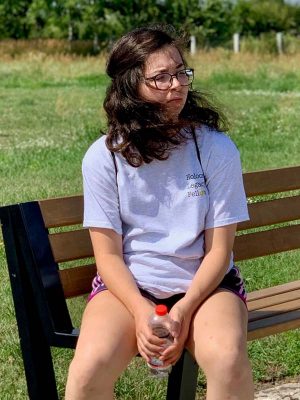 Birch trees stand tall in Poland. They reach up toward the heavens, where God slept. They are white and pure, and their forests invite picnic-ers and mushroom-gatherers. They dance in the wind like innocent, overgrown reeds. But the trees were witness to the most atrocious genocide.

It began with a new set of train tracks that cut into the Treblinka countryside. Then the trees bowed to peek the arriving travelers: thousands of families, whispering in different dialects, gripping on to each other to delay the inevitable unknown.

Bullets. Fire. And everything is hidden by a blanket of meadow, and it is hard to picture crime. The trees stand guard of a field of stones, big and small, that represent the communities slaughtered here. A white ribbon embroidered with names weaves through their trunks. The trees remember the terror that took place, and they shudder, cold air wafting from their leaves past the visitors weaving through the rocks. I feel my skin prickling.

The beauty of nature in Treblinka contrasts what made the area so infamous. That’s what the Nazi’s did to everything; the Wannsee cocktail party conference happened in a gorgeous mansion overlooking a shimmering lake. Out of that grandeur came a disgusting decision. They planted beautiful trees outside of Auschwitz and named the death factory Birkenau after the birches.

Just as the beauty of nature is immeasurable, the scale of the Holocaust is unfathomable. Six million Jews died. Reduced to ashes, their dust rises with the breeze and sprinkles the memories of the people over the Majdanek village. Yad Vashem holds four million names of victims, but the difference is where the extent of the genocide becomes evident. Imagine all the family, friends, classmates, neighbors, communities that a single person knows perishing, and with them every recollection anyone had of that person.

Those names have already been forgotten. But as a Holocaust Legacy Fellow, it is my job to assert their existence. How the world stood silent, knowing the torture that people were going through in Poland, is abominable. Individuals like Oscar Schindler and Otto Weidt stand righteously among the crowd of cowards. I promise to rise up like they, against peers and adults who are ignorant to the residue that the Holocaust has left on the world.