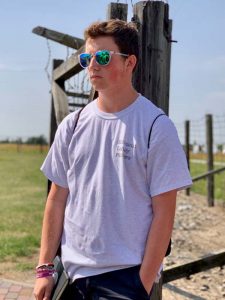 Words cannot come close to encompassing how impactful this trip was on me and how much I learned from it. I will do my best to express some of the ways the Holocaust Legacy Fellows trip impacted me.

I always felt my deepest connection to the victims of the Holocaust during our trip when we were talking about children who were killed, children’s parents who were killed, or children who were separated from their family. I have spent the last three years as a youth sports coach at the YMCA in Needham This year I worked in their after school program as a camp counselor with children ages 3-5. In Poland, whenever we visited a mass grave for children, a memorial for children, or something else, I would think about all the kids that I’ve coached and worked with over the last couple years. One girl, Lizzie, would cry whenever her mom wasn’t at her t-ball class within the first 20 minutes. Imagine not knowing when or if you would ever see you parents again, at any age, but especially at a young age. Another girl, Rachel, always runs to give her dad a hug every time he picks her up after school. I always found myself thinking about kids running towards their parents one last time without knowing if it would be their last, as their entire family was broken apart due to Jewish people being forced into the concentration camps and murdered. When I’m at work, I see joy spread across my kid’s faces and the love in their hearts when they see their parents. I struggled to comprehend how people could tear children from their families and murder them. I know how important family was to all those kids who were separated, and how important it is to the kids I’m with every day now. I also thought about how important my family is to me, and how I can often take them for granted. I see them every day and never have to worry about being separated from them or never being able to see them again. The relationship that I have with my family and the relationships I see every day with my kids at the Y is everything the 1.5 million children who were murdered in the Holocaust wanted, but could never have. I came back from the trip with a much greater appreciation for my family, whether they know it yet or not. I know how many families were ripped apart and how many children were killed before they could have the same relationship and connection to their families that I have.

Aside from developing a greater appreciation for family, I also learned a lot about the human capacity for cruelty through learning about the Holocaust and thinking about myself as well. One thing that I thought a lot about was the fact that Hitler, the Nazis, and all of the bystanders were simply people like everyone else. The bystanders who saw people walking from the train station to Majdanek, and saw smoke rising from the crematorium’s chimney chose not to say anything or “ignore” what was happening right in front of their eyes. They would be risking themselves if they spoke up. People are inherently selfish like that. I was talking with another fellow while walking through Majdanek and we talked about how if an illegal immigrant came knocking on one of our doors begging for us to hide them, we were not very confident at all that we would help them. Obviously, the right thing to do would be to help them. There is so much risk involved in that situation that neither of us thought we would be able to help that person. The same thinking applies to all the bystanders during the Holocaust. It’s hard to say that out loud because you want to be able to help people whenever you can, but you never know how you will react in a situation like that where it is someone else’s life on the line and maybe yours as well if you help them.

Lastly, I learned a lot about the importance of always having hope when you’re in the midst of a struggle, no matter how big or small it is. Hope is what keeps us going, and it is what kept all of the survivors of the Holocaust going. Although their spirits might have been broken, they never lost hope. When we were walking through the Polin Museum in Warsaw, I read and copied down a quote that I connected to and also thought encapsulated that concept of always having hope pretty well. It is from Adam Czerniakow’s Warsaw Ghetto Diary, and it reads: “I am reminded of a film: a ship is sinking and the captain, to raise the spirits of the passengers, orders the orchestra to play jazz number. I had made up my mind to emulate the captain.” The quote caught my eye because I am a jazz musician, but I feel like it also emphasizes the importance of having hope in a tough situation. Czerniakow wanted to keep people’s spirits high in the ghetto by giving them hope for a better situation, just as the ship captain does when he orders the orchestra to play a fun jazz number. Through all the struggles that the Jewish people and other people as well went through during the Holocaust, hope was a constant that pushed people to keep fighting and eventually helped them survive. Without hope, we would be nowhere. We heard from different survivors in our pre-trip meetings because they had hope and survived. We heard stories about uprisings fueled by those with hope of surviving. We will all carry out our mission as Holocaust Legacy Fellows because we hope to preserve and perpetuate the memory and lessons of the Holocaust in order to improve the world we live in and ensure that nothing like the Holocaust ever happens again.