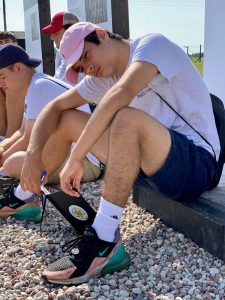 6,000,000 Jews and of them one million five hundred thousand children. Now those are big numbers. For as long as I can remember I have always been drawn to numbers. Whether it’s the amount of feet in a mile or my favorite basketball player’s shooting percentage; I am always drawn to statistics and data. I have always found that numbers help me to understand many aspects in life. Because of the way my mind works, I had no idea how I would process all the heavy information I was yet to learn about the Holocaust. Not surprisingly, after nine days of immersing myself into the raw history of the Holocaust, the incomprehensible numbers stuck with me the most.

17 – That was the platform number at the Grunewald Train Station. The train station that was responsible for transporting 50,000 Jews to Theresienstadt, Lodz, and Auschwitz-Birkenau. During my visit at platform 17, I noticed the plaques that line the train tracks. Each was engraved with a specific date followed by the number of people deported on that day. As I walked along the platform I was disturbed by the perfectly rounded numbers. 50, 100, or 1000. Such precision is difficult when large numbers are involved, but the Nazis maintained incredible accuracy to manage each and every individual they sent to die.

83 – That was the number of minutes it took for the German officials to determine the fate of the Jews at the Wannsee Conference in 1942. It was then and there that the Final Solution, which called for the extermination of all Jews, was decided. Just to put that into perspective, today it takes up to 15 years to carry out a death sentence. In Germany of 1942, astoundingly, it took ONLY 83 minutes for the Nazis to sentence each of the 10 million Jews, living in Europe, to death.

17,000 – This was the number of stones at the death camp of Treblinka. I assumed that every stone represented a human being that was murdered at the camp. The stones are all that remain to remember the lives of the people after Treblinka was destroyed by the Germans. We were given time to walk among the stones and naturally, I began to count them. It didn’t take long for me to realize that counting each stone would be an impossible feat. Finally, once reunited with the group Sara, our knowledgeable tour guide, explained to us how each stone represented larger communities. My jaw dropped when I looked around at all of the stones. The thought of 17,000 murdered people shocked me, so to learn that this number represented entire communities was inconceivable. 900,000 – That is number of deaths as an aftermath of Treblinka. I have to take a second to think after reading that number. This is the kind of number where you have to count the zeros to make sure you’re saying it correctly.

30 and 70 – Those were percentages of how the Nazis separated the Jews arriving at the camp. As the Jews arrived, they would be chosen by a doctor who would determine which ones would live, being the fortunate 30 percent, or which people would be sent straight to their death. As I see it, the doctor is literally given the power of God. No one should be capable of choosing someone’s fate, no one except for God.

3 – That is number of kilometers to the nearest train station in Lublin from Majdanek. So what is the significance of that. This meant that the prisoners had to walk through the center of Lublin all the way to the camp. Considering all of the soldiers and the huge line of people headed in the same direction, I find it hard to believe that the Poles never took notice. In addition I remember as soon as me and my group approached the camp there was a very obvious difference between this one and the others, Majdanek was completely in the open with apartment buildings staring straight down into the camp. EVERYONE literally every person in Lublin knew what was going on in their own backyard, yet nothing was done. The camp was open for three years with a constant flow of prisoners, but all the Poles decided to remain as bystanders. 56,000 , that is only the number for the Jewish bodies that had been identified with names. After viewing and discussing the Holocaust for so long the numbers begin to get blurred. Looking at the number 56,000, it almost seems insignificant especially when compared to the deaths at other camps that had reached over a million. Nearing the end of the trip at Majdanek, it was in this exact circumstance that I felt as though I was becoming numb to the numbers. Finally, in our tour we reached the site of the ashes. I looked into the pit and all I felt was emptiness. I could see rocks that were thrown inside dirt… and bones. I didn’t know what it was at first or if it was real. I kept staring down at it. I paced around the pit. There were more and more pieces of white fragments. I even started to count the pieces till suddenly I overheard someone say the word bones. I could no longer be in denial. What filled the pit was in fact the bodies of burnt HUMANS. Tears formed in my eyes, but I rubbed them away. I didn’t feel comfortable crying in front of the bodies after what they had gone through.