There I stood halfway across the world at the concentration camp Majdanek, several feet away from a hill of ashes, the remains of 18,000 people. The hot, humid weather beat down on my sunburnt back. My legs and feet were sore from the extensive walking I had done. When my eyes saw what was in front of me, all feeling went away and all I could do was stare. Human bones protrude from the 25 foot high hill of ash and sand. The more you look the more horrific components you discover. Built around this hill of ashes, a gigantic stone memorial read, “Let our fate be a warning to you”. Whether I was ready for it or not, a huge responsibility had just been placed on my shoulders. The lifelong mission of preserving the legacy of the Holocaust and never letting anything like this happen ever again, had just been put into my hands. This one moment would impact me like nothing has before.

Six months before visiting several concentration camps and historic Jewish communities in Poland and Germany, I received a letter on my doorstep inviting me to go on this trip. I had proved myself as a leader in my community with a strong voice for Israel by starting an advocacy club at my high school and leading meetings for it every month. A first-year foundation was gathering a small group of incoming seniors to go on a trip and learn first hand the horrors that occurred during the Holocaust. After thinking about it and discussing the trip with my parents, I knew that this was not really a choice, a responsibility called me and I knew I would fulfill the mission.

The number of Holocaust survivors is dwindling and in a few years there will be none left who witnessed the horror. People need to hear their first hand stories and lessons so that their experiences will live on in this world after they pass away. This is something that is more meaningful than any test I will ever take, any game I will ever play in, or party I will ever attend. Going on this trip and learning as much as I possibly can about the Holocaust is something that will affect more than just myself and the people in my community. My experiences here can impact the entire world. Finally a chance to get involved in something bigger than myself and my future. I agreed to attend.

As the trip approached, I became nervous because I didn’t know how seeing these horrific sites would affect me. I did not want to lose my easy going, positive spirit. Whenever I got nervous, I reminded myself that if people my age actually had to endure such horrors, the least I could do is go see it and learn about it. Already I could feel myself maturing.

One month before leaving for this journey, most of what I knew about the Holocaust was predicated around statistics, facts, and dates, so when someone puts Holocaust denial pamphlets on my temple (Temple Emanuel in Marblehead) I couldn’t grasp the significance of what had been done. Actually being at these places taught me so much more than I could have learned in any classroom. Seeing and touching the places that I have heard about all my life was incredible. It is so important for people to learn about the Holocaust, because this is how we can prevent it from happening again.

After going on this trip I know why and how everything happened. A nation that was at rock bottom rallied behind an evil man. No other country realized what was happening until it was too late. Now, because I have learned about the Holocaust, I have the ability to spot potential signs of danger. I learned how humanity can be lost. In this spectacular case almost an entire country lost their humanity. Instead of accepting defeat in WWI, the German party blamed the Jews. Why were they successful in a time when everyone else was struggling? Envy and hopelessness fueled a shared hatred for the Jews. When people allow themselves to be manipulated and mindlessly follow others, their humanity can be lost.

The biggest question after moving on from this trip is what will I do with the experiences and education that I received? First and foremost, I won’t tolerate any anti-semitism from anyone. Even if a friend makes a joke that I perceive as targeting Jewish people I am going to let them know. Jewish people cannot allow their friends to talk negatively about Jews. Then you become a bystander. Bystanders were prevalent in the time of the Holocaust too. Many Polish people just watched as Jews were marched through their towns to be exterminated. If you are not actively trying to stop a problem and you let it happen, you are part of the problem. I promise to not be a bystander. 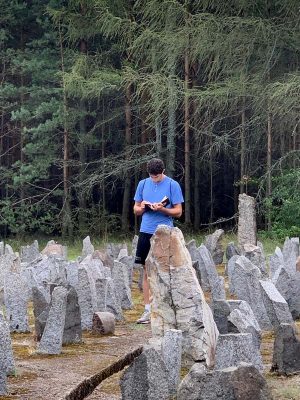 Another action I will do is spread what I have learned as a Holocaust Legacy Fellow throughout my community. Because I am the president and founder of Advocates for Israel club at my school, I can share with the membership what I have learned. Together, we can find ways to keep spreading the legacy of the Holocaust and the teachings of the survivors. Since I will now be a senior a mission of mine is to get younger students in my club. I can keep spreading these messages through to them and they can tell their friends. It only takes one person with a strong message to reach an entire community of people. I have already been interviewed by a journalist on my trip and shared with him what I plan to share with my peers.

I am incredibly thankful for the opportunity to go on this trip and will take a lot from it. I will make sure that all the resources and effort put into planning the trip were worth it. I am a different person now then who I was before going. I grew and matured a lot. When something matters to you ,it is easy to learn about it. The Holocaust matters to me, so I was able to bring a lot of information and experience back with me. Although I may have had more fun being in Israel and sightseeing, this trip gave me something I have never really had. This is a purpose. Obviously my purpose is to set a good future for myself as a high school student, but now I have a purpose bigger than myself. I will rise to the calling and do whatever I can so that at no point in my life will I have to watch history repeat itself and our world fall back into the control of inhumane hatred.